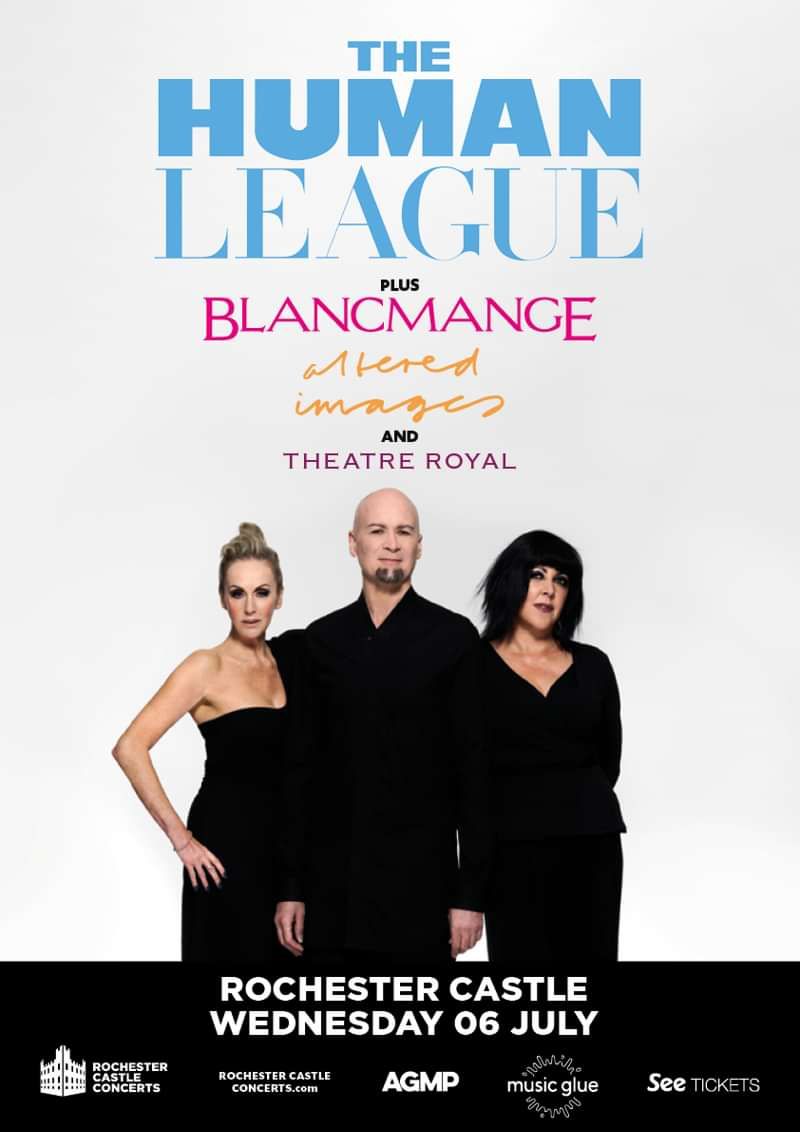 If you pick the VIP ticket option, please note that it includes the following exclusive benefits:
- A dedicated fast track VIP entry lane
- Private VIP bars offering an eclectic range of drinks from beers and wines to cocktails and bubbly
- VIP food area, bringing you the best range of street food
- Access to premium toilets only available for VIP ticket holders
- Seating within the VIP bar area (subject to availability)

In my case, it was Thursday 30th April 1981. I was a bored 13 year old, watching Top Of The Pops with disinterest, when my attention was annexed by a man with a hairstyle like a half-drawn curtain, two girls next door, well they were if you lived on the coolest street in Britain, and two guys standing sullenly behind synthesizers. In the background two audacious reel-to-reel tape machines whirred provocatively away producing a brutal, pounding robo-beat, throw in some intriguingly encoded lyrics, “Put your hand in a party wave, pass around/Make a shroud pulling combs through a backwash frame...” and The Human League were my new obsession.

The old posters were torn down. The League posters went up. If you were older and/or more clued in to the musical avant-garde, you already knew all about The Human League. For my generation, they were the fresh sound of a new decade. Eagerly, you re-investigated their enigmatic past...

Now, the history books will invariably tell you that The Human League’s career is the tale of two pop groups but, if you listen to their two pre-fame albums, Reproduction (1979) and Travelogue (1980), for all the esoteric songs about the karmic damage caused by the farming of silkworms, “Being Boiled” written during Phil Oakey’s six months as a vegetarian, arch satires on indie snobbery, or bizarre tales about a love affair between a crow and a baby, the same threads were there.
This music was always, in essence, unashamedly POP, albeit made from a post-punk perspective as founders Ian Craig Marsh and Martyn Ware were, along with Oakey, Roxy Music / Bowie fans who had turned punk, it was in Oakey’s own words, a “consumer version of Kraftwerk”.

The disintegration of that line-up, engineered by their then-manager Bob Last, came about because there were “too many egos” for one group, Oakey freely admits that he and Ware were both “pompous and arrogant” at that time. The founding duo left to form Heaven 17, giving Virgin Records two great synthpop acts for the price of one but, more pressingly, giving Phil Oakey the headache of a European tour with no band members.

What came next is the stuff of pop mythology. When Phil Oakey met Joanne Catherall and Susan Anne Sulley - no, they weren’t working as waitresses in a cocktail bar, they were too young to be working anywhere - in a Sheffield nightclub and recruited them to join The Human League Mk II, they were still schoolgirls. The night after that Top Of The Pops performance they had to rush back north for an A-level exam the following day. Catherall and Sulley had not previously considered making their living from music, never having even been in the school choir, but that was fine: neither had Phil, Ware and Marsh had hired him as their lead singer because of his height, as much as anything else.

With the addition of bassist Ian Burden and former Rezillos guitarist Jo Callis, the all-new League made one of the greatest albums of all time, Dare, a ten-song suite of shimmering, intelligent original electronic pop, punctuated by the singles “Sound Of The Crowd”, “Open Your Heart”, “Love Action” and, of course, “Don’t You Want Me”, an immortal pop classic which no petrol advert can taint.

“Don’t You Want Me”, a clever duet between Oakey and Sulley, examining the death of a love affair from both perspectives, was a song the band never wanted to release as a single, but it became the biggest selling single of 1981, and proved that the best Christmas Number Ones are the ones which aren’t about Christmas at all and, if this year’s chart topper can even come close, it really will be a seasonal miracle.

There was a pleasing Dadaist blankness to The Human League: what you saw was what you got. They were prime numbers in a world of complex equations: you couldn’t break them down. Despite the sometimes arcane subject matters of their songs, there was always a certain straightforwardness to the League. Even Oakey’s handsome Yorkshire accent was never modified to a mid-Atlantic drawl for the sake of radio digestibility and it’s notable that, in 25 years, the band has never left their hometown of Sheffield for the lure of London.

Following the platinum popularity of Dare was never going to be easy, and it took The League two years to complete its somewhat patchy successor, Hysteria, although in the interim, they released a pioneering album of remixes, Love And Dancing, and two fantastic stopgap singles in the form of the meta - Motown “Mirror Man” and the juicy, jubilant “(Keep Feeling) Fascination”.

Throughout the decade, the League continued to be a successful singles act with hits like “Louise”, “Life On Your Own”, “Together In Electric Dreams”, the latter not strictly a HL track but a collaboration between Phil Oakey and Giorgio Moroder, and the much-mocked “The Lebanon” whose couplet “And where there used to be some shops/Is where the snipers sometimes hide” recently won a Worst Lyric Of All Time poll on BBC Radio 1, to Phil’s perverse pride. The way in which they frequently broke pop’s fourth wall with acutely self-aware, personal touches (“This is Phil talking…“) and spoken narrative “When we were apart, I was human too…”
was reminiscent of pop’s golden age - to anyone who had heard the League Mk I’s reverent cover of The Righteous Brothers’ “You’ve Lost That Loving Feeling”, this was no surprise.

For their next move, the League surrendered a degree of creative control but, Sulley believes, saved their career by doing so. They hooked up with R&B producers Jimmy Jam and Terry Lewis, the former Prince acolytes whose Flyte Tyme team had recently scored big with Janet Jackson’s Nasty album. Jam and Lewis wrote “Human” for the League, another great both-sides-of-the-story duet, which became a massive transatlantic smash, but also, ironically, the band’s last significant hit for some time.

Even at the lowest ebb of the League’s fashionability and commercial success, the quality control never really dipped: listen to “Heart Like A Wheel” from the turn-of-the-Nineties album Romantic?, and it can hold its own with the best of their back catalogue. To many people, the joyous “Tell Me When?“, a top ten hit in 1995 from the Warners album Octopus, was a ‘comeback’, but the truth is that The Human League have always been with us. Through all the peaks and troughs in their popularity, the League never broke up, never quit, never went away.